Pick Your Own Christmas Tree.org 2022

Find a choose and cut tree farm or fresh pre-cut trees near you!

How to Make Bread Stuffing (or Dressing) for Turkey

Stuffing (aka "dressing") is tradition at Thanksgiving and Christmas along side the turkey! Here's an easy way to make the best stuffing you've had! Fully illustrated, step-by-step recipe and directions you can print out and put on the counter while you make it! 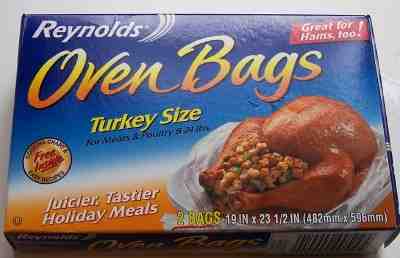 Optional: My guests rave when I make the stuffing with these three added, in addition to the above:

Step 1 - Chop the onion and celery Carefully wash the celery (sand and gritty dirt sticks to the inside surfaces of the stalks). Then dice the celery finely (I used a food processor or chopper). You should use the leaves, as well as the stalks.  Peel and chop the onion. Step 2 - Cook the celery and onion

Melt the butter in medium pot (say, 4-quart).  Add the chopped celery and onion and cook over medium heat until they are tender, about 10 minutes, stirring occasionally. (you can chop the bread while it is cooking). Then remove from the heat.

I use a large serrated knife to take stacks of 5 or so slices of bread at a time and slice them first one way, the rotate 90 degrees and cut the other way to get cubes. 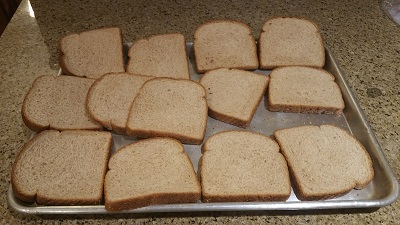 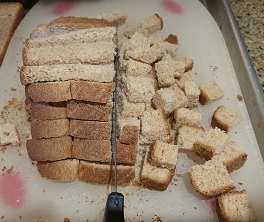 Peel and core the apples, then gently slice or dice them into roughly 1/2 inch (1 cm) cubes) and add them to the bread crumbs

Step 5 - Mix the all the ingredients

Gently toss the celery/onion mixture, the bread cubes, spices and all remaining ingredients (including the raisons, chopped nuts and diced apples), using a spoon or large spatula, until it is evenly mixed.

Most food experts (whether they are chef's, like Wolfgang Puck, or food safety scientists) do NOT recommend stuffing the stuffing inside the turkey.  Safety is the primary reason - it is difficult to ensure that all parts of the turkey and =stuffing reach at least 165 F to kill salmonella.  Taste and practically are also factors.  The meat will tend to be overcooked, if the stuffing is cooked to 165 F in the center. And an unstuffed turkey takes much less time to cook!
So, I recommend baking the stuffing separately, and I have a simple, foolproof, no-cleanup method for you! All it lakes is a large casserole pan or rectangular baking dish, 13x9x2 inches or so; and a large oven cooking bag. I use a turkey cooking bag like the one shown at right.
Simply put the stuffing into the bag (set the bag in the baking dish), add the 2 cups of turkey broth (or chicken broth) and close the bag.  I don't tie the end super-tight, that allows pressure to escape. Place stuffing in the bag in the baking dish in the oven and bake at 350 degrees F for about 90 minutes, until a meat thermometer reads 165 F to 175 F in the center.

Now, on to the fat-free, but super-tasty gravy!